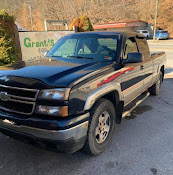 Got a car the beginning of February . It broke down twice before it was sent into a shop. Not only was the car NOT fixed, but the shop it was sent to stole something valuable out of the glove compartment, TWICE. The car broke down again a few days later for the SAME reason it was sent to be fixed for

They were very disrespectful to us when we went to test drive a truck. Also they told my fiance that they would have to hold his check until it cleared and then they would give him the difference back after it cleared. If you want to buy a car go to Morris Garage in Mount Hope off of Maple Fork Road